Early this year, OSSC club member Steve Sharzer had the opportunity to speak to Travis Hill, Principal of TWOth Autosport, about the 6th annual Race of Remembrance that took place at the Anglesey Circuit in Wales on November 8-10, 2019, in which TWOth partnered with Operation Motorsport of North America to field a race car and team. 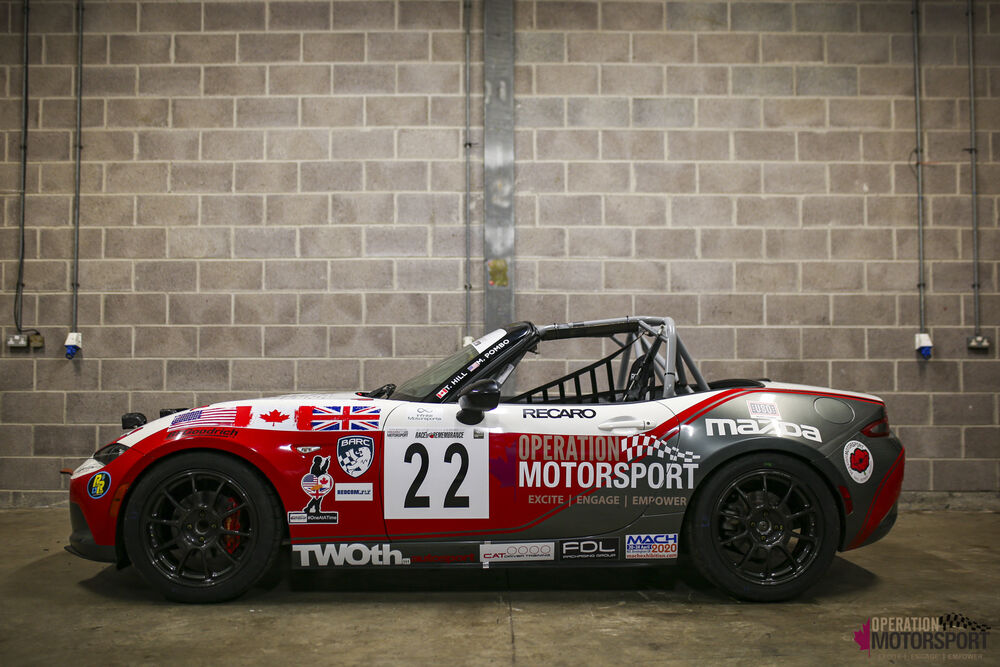 SS:  Travis, before we talk about this year’s Race of Remembrance, can you please tell me about Operation Motorsport, what it is and what it does.

TH: Operation Motorsport is a veteran led, not-for-profit organization that works with medically-discharged service-men and women.  It is a diversional therapy program for veterans who have been in the military for years, and who have now essentially lost their job and identity.   Everything they know is about how to be a soldier and serve their country, and the pride and challenges that come with that, and then all of sudden that is gone. A lot of the planning they have done for their life has changed.  And now they have to integrate back into society.  Sometimes they have not just physical illnesses or injuries but also mental ones like PTSD or depression.  It coincides with a time in our society when we are talking more about mental health.  It is a way to give these men and women a group to work with, a place to bond, a place to share their stories, and the chance to do something really fun that they might otherwise never have the opportunity to do. 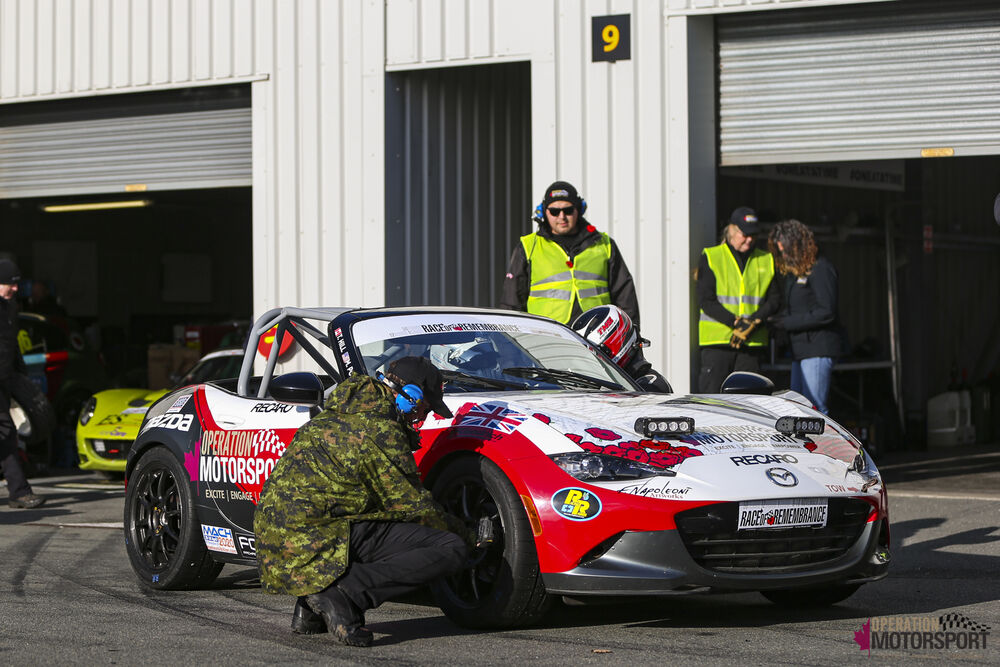 SS: What do they do when they are participating in Operation Motorsport?

TH: Beneficiaries can participate in motorsports in various ways.  They might start off by coming to an Operation Motorsport open house, car corral, or a car race weekend.  Operation Motorsport works with larger organizations involved in motorsports, for example, the various IMSA racing series like Porsche Cup Canada and WeatherTech, SRO World Challenge or TC America, or the Canadian Touring Car Championship (CTCC).  Racing teams in these series, including TWOth Autosport, will bring in beneficiaries for a race weekend or even for a full season.   Another example would be the Salute to Speed event that took place at Petawawa last September.  It was held at the Pembroke & Area Airport, and included an auto show, high-speed autocross, and a half-mile Top Speed Challenge, with the proceeds going to Operation Motorsport and others local causes.

When people first participate in Operation Motorsport, they start slowly with more light-duty roles.  Someone who was a tech in the military might play a role as a support tech.  For example, this year we worked with Theo, a 2-year beneficiary, who provided support as a co-engineer for the TWOth Audis in the CTCC throughout the entire season. There are lots of other roles other than being a mechanic or race driver, for example, working in hospitality, communications, or being a truck driver for a race team.

SS:  What are the philosophy and goals of Operation Motorsport?

TH:  There are three stages of Operation Motorsport: excite, engage, empower.  Excite is the first experience when you come to the racetrack and see whether you enjoy it and if there is a role that interests you.  Engage is diving deeper into a role and learning the in’s and out’s.  In this connection, some of the beneficiaries receive support for retraining or education, such as Theo, who’s attending university for engineering supported by the Canadian Forces.  In the final stage, after following one’s interest, becoming educated or trained, and developing connections in motorsports, one can move to get a full-time job in the Empower stage.  But I should add that people can also do this on a part-time basis or just come out once a month to participate, for example, to be a volunteer marshal or flagger at a racetrack like Calabogie.

SS: How long has TWOth Autosport been involved with Operation Motorsport?

TH:  I met Tiffany and Diezel Lodder, the founders of Operation Motorsport, when we were racing Porsche GT3 Cup Canada in 2017.  We met in the paddock at the Toronto Indy, as many motorsport partnerships do. Diezel is a military veteran himself, introducing his concept to Trevor and I, before we brought another couple of teams into it.  It’s certainly expanded in the years since then.

Operation Motorsport now operates in both Canada and the United States, with a home base in Brighton, Ontario and Raleigh, North Carolina.  I am proud to say that TWOth is the motorsport operation partner, while I am a member of the US Board of Directors, as well.

SS: The Race of Remembrance – what exactly is it?

TH: The Race of Remembrance is the highlight motor race for Mission Motorsport, the United Kingdom organization that is a sister organization to Operation Motorsport. It is a gruelling 12 hour race on the Isle of Anglesey, at Anglesey Circuit in Wales.  Although the track is right on the beautiful coast of the Irish Sea, the November weather always provides the biggest challenge to drivers and teams.

The 1000km race is separated into two six-hour segments: The first segment runs Saturday afternoon and into the night, with the remainder of the race completed the following day.

We stop the race for an hour on Sunday for a Remembrance Day ceremony.  The cars stopped on the front straight-away, and those who are not driving change into their military uniforms.  The ceremony is done with participation from Canada, the United States and the United Kingdom.  It was an extremely moving event. 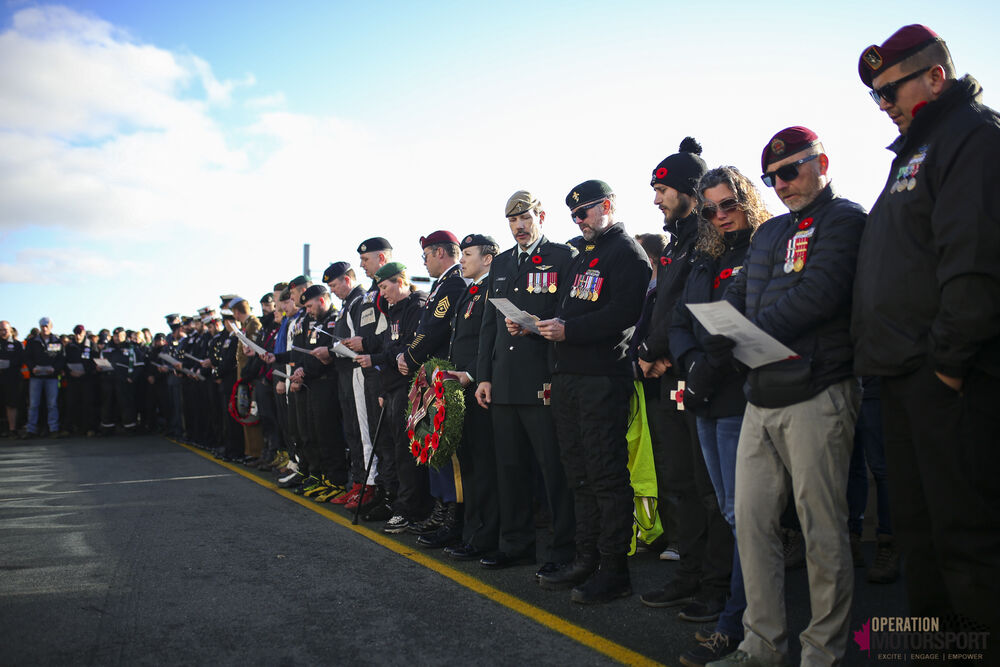 SS:  Who was part of team and how did you prepare?

TH:  Nearly everyone on our team was from the military in one way or another, with myself and a photographer as the only civilians.  What we at TWOth Autosport contributed was motorsport-oriented planning including checklists and processes to follow, to help run the car and a successful motorsports weekend.  The beneficiaries bring their abilities, background and experience in terms of planning, structure and discipline, along with their new skills developed with various OpMo supporting teams throughout the season.

SS:  How did this year’s race go?  How many teams participated?  How did your team do?

TH:  The turn-out was great.  There were 50 teams participating.  We were racing against all kinds of cars in different classes.  There were 12 Caterhams, a number of Morgans, a ton of Miatas, some Citroen C1’s, Lotus Exiges and Elises.  We ran a new Mazda MX-5 Cup in the lead class.  It is a tight, nimble-handling track that definitely favours a smaller car.

Mazda Motorsport was kind enough to donate our car last year for this purpose.  It is owned by Ben Devlin, a Mazda factory driver based in the UK, who won the 2009 Petit LeMans at Road Atlanta in LMP2 with Marino Franchitti and Butch Leitzinger in a Dyson Mazda prototype car.  We rented the car this year with Operation Motorsport from Ben.  In fact, this was the first time Operation Motorsport ran its own operation; previously we partnered with Mission Motorsport.

Because it happens on Remembrance Day in November, it comes with all the weather at that time of the year.  As a result, it is a hell of a race!  And, we were smart enough to do it in a convertible!  Actually, it wasn’t that bad.  I shared the driving duties with one other driver, Mark Pumbo, a racer from the U.S. who drove IMSA and TC America, both in TCR cars, which TWOth also races.  My first stint was three hours straight, in the night. It was raining hard and only four to six degrees celsius – quite a way to start off a 12 hour.  Thankfully, we were driving a new Mazda MX5 Cup car (an ND built in the U.S.) which was extremely predictable and still had a heater and defrost system in the car.  I was very comfortable as a result, except for getting hit by a little bit of rain and wind. With our endurance racing experience at TWOth, the job was simple for me in that first double-stint – run quickly but don’t wreck the car!

Sunday, the weather was beautiful and you could see the Irish Sea which was perfectly blue along the mountains of Snowdonia.  One corner section – turn six, you come over a crest as you make a long right, and you see this beautiful view, looking out over that the coastline, and then you realize – oh, s..t, this is a braking zone, and I have to turn!

Clear skies allowed us to push the pace while still conserving fuel when we could. By the time the checkered flew, we secured a third place finish, only doing so with two laps to go. To pull off a podium in the first time running on its own was a real accomplishment for Operation Motorsport, and everyone who participated.  To bring 15-20 people across the pond, manage a week of preparation and the race weekend, to rent a car that was based in England, and making sure you had all the tools – these were all challenges that Operation Motorsport met successfully.  It was a group effort, it was a lot of fun, and very rewarding for everyone. 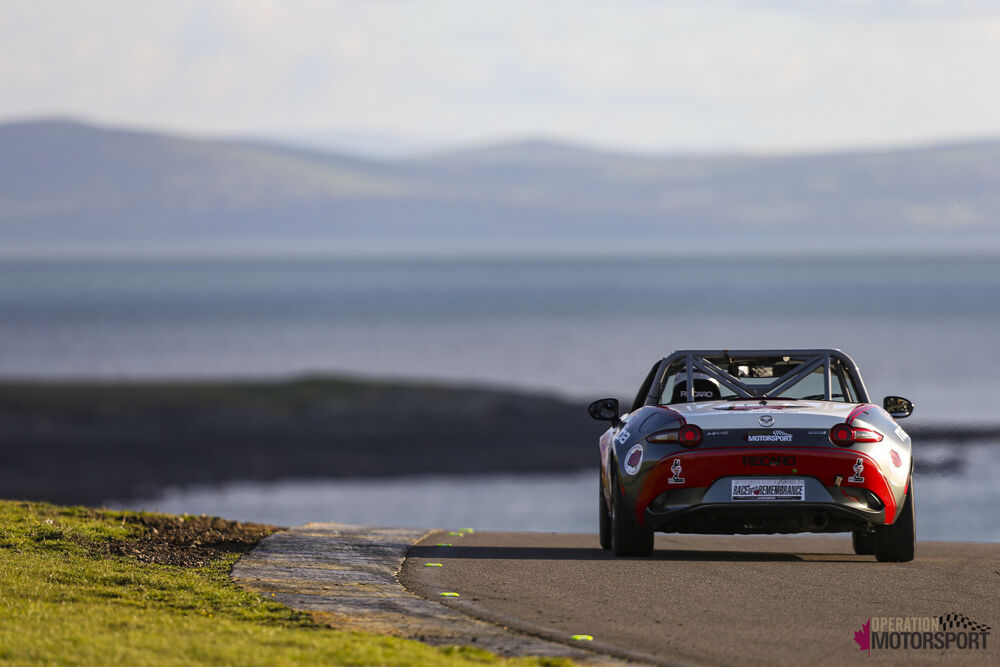 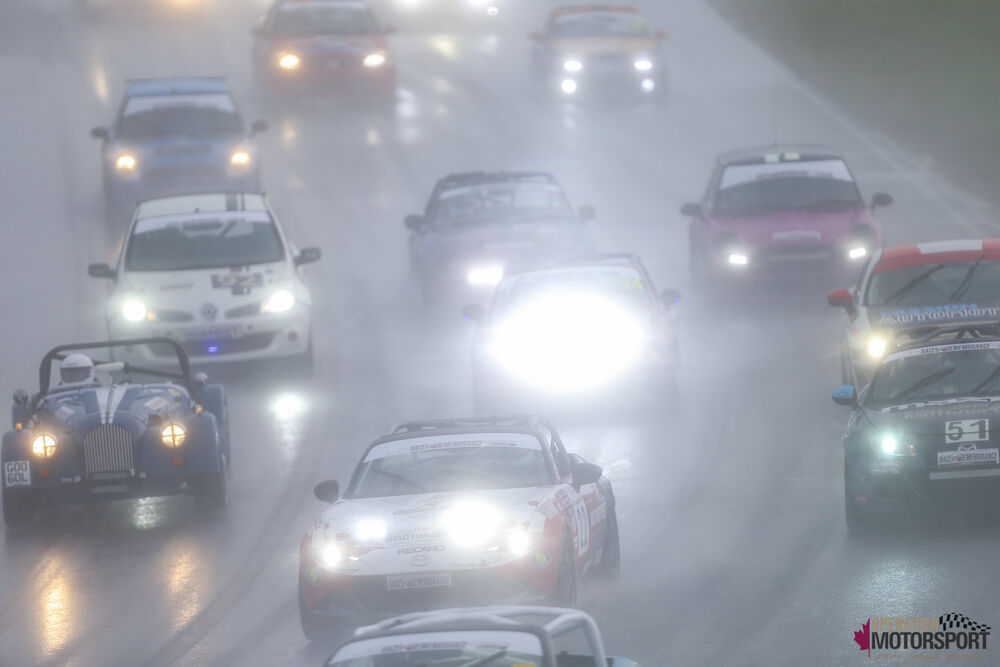 SS:  What did you personally take away from it?

TH: As I said it was a very rewarding weekend, just to see how the beneficiaries have progressed during the past couple of years was very satisfying.  You can really see the difference you are making, the impact you are having on them.  The team executed flawlessly, it was perfect.

My family was involved in the military, WWI, WWII and Afghanistan.  To have an impact on something greater than motorsports was and is pretty significant for me and my brother Trevor (who is a member of TWOth Autosport).

SS:  Where do things go from here?

TH:  The UK’s Mission Motorsport, now part of Prince Harry’s Endeavour Fund, has ties to Land Rover and Jaguar, which they draw upon to support initiatives.  Having been in operation for five years longer than Operation Motorsport, they’ve placed a lot of beneficiaries in the automotive industry. This is what TWOth Autosport is aiming to do as the next growth phase with Operation Motorsport – leveraging our industry relationships with brands like Porsche and Audi. As part of our Anderson41 Driver Development program – which features our two Spec Miata race cars used by TWOth partner Craig Anderson and his brother John to learn to race – we also intend to train Operation Motorsport beneficiaries at Calabogie Motorsports Park, so they can drive as well as support their cars. 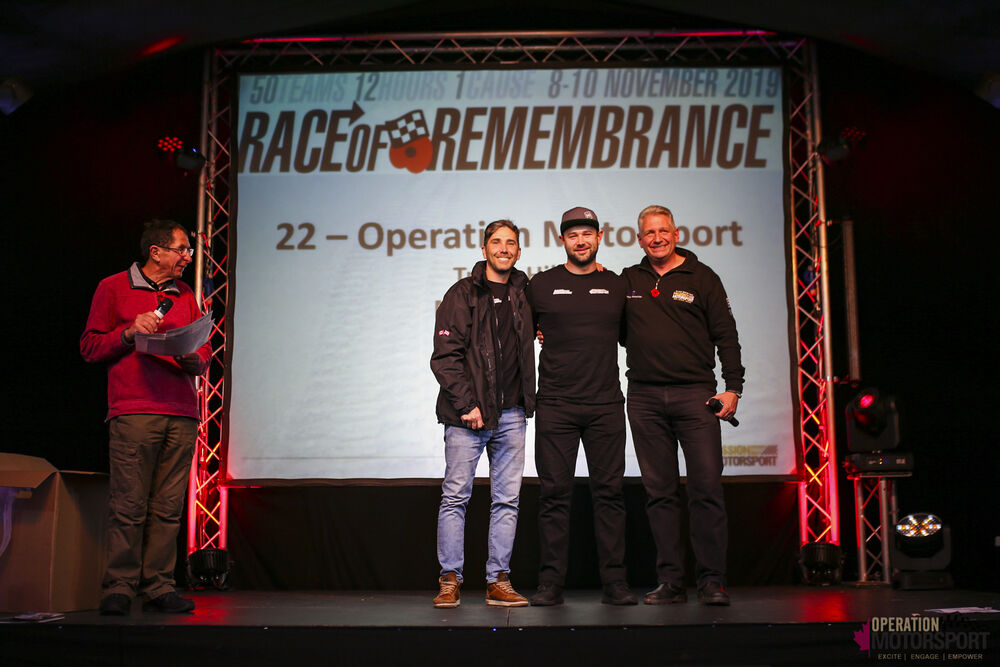 The Race of Remembrance will be on the TWOth and Operation Motorsport calendars for years to come.  Our goal is to run two cars at the next RoR in 2020:  One car to consist of TWOth endurance drivers and the other will consist of beneficiary drivers – both supported by our veterans.

In the meantime, we’re already into the 2020 racing season, starting off at Daytona Jan 2-5 with the IMSA Roar Before the Daytona 24, before heading back to make our IMSA Michelin Pilot Challenge debut January 24. If 2019 was any indication, 2020 will be another busy and rewarding year around the track!

** This interview was conducted prior to the COVID-19 outbreak and subsequent global events.